This blog is the first of three that will discuss the Wisconsin drunk driving sobriety tests commonly used by police officers in the field. There are three tests that police officers use to help them determine if a driver is under the influence of an intoxicant.

The three tests are: Horizontal Gaze Nystagmus (HGN) or Eye Test, Walk and Turn Test (WAT), and the One Leg Stand Test (OLS).  Police officers use these tests in combination with other factors to determine if they may arrest you for drunk driving. This blog will specifically discuss the HGN test commonly known as the eye test. 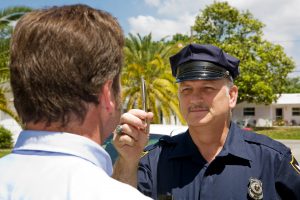 The eye test is called the Horizontal Gaze Nystagmus Test. During the HGN test the officer uses a pen or stimulus to move your eyes back and forth in an attempt to observe horizontal nystagmus. Horizontal nystagmus is an involuntary jerking motion of the eyeball as it moves from left to right and back again.  This test is widely considered to be the most reliable indicator for impairment because the eye movement is involuntary.

When a police officer administers the HGN test he is attempting to spot three clues in the movement of the eye. The three cues are 1. Lack of smooth pursuit, 2. Distinct and sustained nystagmus at maximum deviation, and 3. Onset of nystagmus prior to 45 degrees. The test is scored a total of six cues, three for each eye.

The HGN test, similar to the WAT and OLS tests, must be administered in a standardized way so that the results may be considered reliable. This is key. The HGN test was designed and tested by the National Highway Traffic Safety Administration (NHTSA). NHTSA itself states that if the HGN and other field sobriety tests are not administered in a standardized way, their results will be compromised. This is where having an experienced Wisconsin DUI/OWI Defense attorney comes in.  I, myself, am certified in Standardized Field Sobriety Test Procedure.

There are only a few attorneys in Wisconsin that are. Those of us that are certified have been through the same training, if not more, than the police officer arresting you for drunk driving. It is your license, reputation, and possibly freedom on the line, you need the Best DUI lawyer West Bend that knows these tests in and out.

If you have been charged with drunk driving in Wisconsin, you need someone who understands what is going on from start to finish. I will sit with you and give you an honest assessment of your case. Examining field sobriety tests is only one part of a much bigger picture. Call 1-877-384-6800 to discuss your case during a free consultation.