Although a few Non-Standardized Field Sobriety Tests may be used, the Walk-and-Turn test, the One-Leg Stand test, and the Horizontal Gaze Nystagmus test are the three most accurate tests for detection of intoxication. 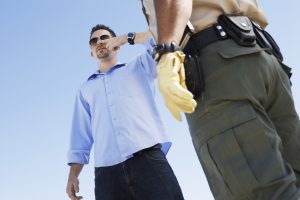 This test is designed to check the eyes for the involuntary jerking of the eyes.  During this test, the officer will hold a stimulus (i.e. a pen or the officer’s finger) in front of a person and ask them to follow the stimulus with the eyes.  The following are the three (3) clues the officer looks for in each eye:

Lack of Smooth Pursuit – The officer will look to determine whether the eyes move smoothly or if the eyes are jerking when following the stimulus.

Distinct and Sustained Nystagmus at Maximum Deviation – When a person’s eye reaches maximum deviation, the eye will jerk involuntarily, even in an unimpaired person.  This slight jerkiness is slight and may not even be seen by the naked eye.  However, a person who is impaired will have a more pronounced jerking in his/her eyes, and will last for a longer duration.

Onset of Nystagmus Prior to 45 Degrees – A person whose eyes begin jerking prior to reaching a 45 degree angle is more likely to be impaired.  The earlier the onset, the more impaired the person.

The officer looks for these clues in each eye, for a total of six (6) clues.  When an officer notes 4 of 6 clues, it is evident that a person is impaired.

This is typically the second test an officer will administer when determining intoxication.  This test is given in two phases.  The first phase is the instruction stage.  The officer will ask the driver to stand in the starting position while giving verbal instructions and demonstrating.  The second phase is the walking stage, in which the driver must walk nine (9) steps on a line (real or imaginary), turn as instructed, and walk nine (9) steps back to the starting position.  There are eight (8) clues an officer will look for during both phases of this test: 1. Whether the driver maintains balance during the instructions, 2. The driver begins the test before instruction, 3. Stops while walking, 4. The steps are not heel-to-toe, 5. Steps off the line, 6. Uses arms for balance, 7. Does not turn properly, 8. Incorrect number of steps. The total number of cues an officer needs to observe to “prove” impairment is 2 of 8.

This test also has two phases, the instructional phase and the performance phase.  The officer will instruct the driver to stand with his/her feet together, arms at his/her side.  When the officer instructs the driver to begin the test, the driver will raise his/her foot 6 inches above the ground while keeping the leg straight and the foot parallel to the ground.  The driver is instructed to count out loud from 1-30 in a one-thousand format (i.e. one-thousand-one, one-thousand-two, etc.).  The officer will look for four (4) clues:  1. Swaying, 2. Using arms for balance, 3. Hopping, 4. Putting the foot on the ground.  An officer will need 2 of 4 clues to indicate impairment.