If you do not request a refusal review hearing within the first ten days after your DUI charge, you will lose the right to challenge it later on. If you have been charged with a DUI and/or Refusal you must contact a Milwaukee DUI Lawyer immediately to preserve your rights. If you miss this ten-day timeframe the penalties will be swift and severe. 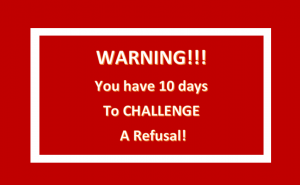 What is a Refusal?

You may be charged with a Refusal if you refuse to submit to an officer’s request for an evidentiary chemical test (i.e., blood, breath, or urine test). This charge is derived from the Wisconsin Implied Consent Law which states that if an officer has probable cause to arrest you for an OWI/DUI you have already given your implied consent for the state, through its officers, to conduct an evidentiary chemical test to determine intoxication.

What is a Refusal Hearing?

If requested within the appropriate time period, a refusal hearing will be set to determine if your refusal of an evidentiary test was unlawful. A refusal hearing is separate from the typical traffic or criminal process that you may face for an OWI / DUI charge.

What is the difference between a Refusal and an OWI / DUI?

The common perception is that a refusal and a DUI are the same thing. This is absolutely false. Compared to a first offense DUI, a refusal carries stiffer penalties including a mandatory Ignition interlock device (IID) when compared to an OWI first offense which has less of a driver’s license suspension and potential for no IID.

Will I lose my license for a refusal?

The short answer is Yes. However, if a refusal hearing is properly requested and scheduled, the revocation will occur after the hearing within the correct time frame. If you have multiple refusals or OWIs, it will result in longer periods of revocation.

What Issues are addressed at a refusal hearing?

What are refusal charge penalties in Wisconsin?

The penalties for a refusal conviction in Wisconsin include:

For your first offense, you’ll wait for 30 days before you can apply for an occupational license that allows you to drive to and from work and other locations the court approves. However, second and third offenses have 90-day and 120-day waiting periods. However, if the second and third offense is within five years of the previous offenses, the waiting period increases to a year.

When you are charged with refusal to submit to chemical testing, you’ll be served with a Notice of Intent to Revoke. You have ten days after receipt of the Notice to request an administrative hearing to ensure your driving license is intact for the period of your case. The Notice of

Intent to Revoke serves as a temporary driving receipt for 30 days following the notice.

Is refusal an admission of guilt?

Refusal to submit to chemical testing at the police station can be submitted to the court as proof consciousness of guilt. The prosecution could argue that you refused to submit to the tests because you knew you’d fail. If law enforcement didn’t read you the Implied Consent warning, your refusal charge could be thrown out.

Can I refuse to participate in field sobriety tests and preliminary breath tests?

Wisconsin law permits drivers to refuse to participate in field sobriety tests and preliminary breath tests without revoking their driving privileges. However, refusing these tests almost always leads the police to proceed to evidentiary chemical testing. But because chemical testing falls under Implied Consent, refusal to submit leads to automatic license suspension.

When a motorist is arrested for DUI and refuses to submit to an evidentiary test, the officer is required to take immediate possession of the arrested person’s license. The accused will receive a notice of intent to revoke the person’s driving privileges. Wis. Stat. §343.305(9)(a). When a law enforcement officer has reason to believe a motorist has been drinking, they may conduct field sobriety testing and request the driver perform a roadside breath test otherwise known as a Preliminary Breath Test (PBT).

If you feel you are over the legal BAC limit, exercise your right to decline the field sobriety test. Some of these tests are subjectively judged by the officer, and most people don’t pass when sober. Tests like the horizontal gaze nystagmus test measure involuntary actions you cannot control.

Note: Remain calm and respectful, while exercising this right.

Can police force you to have blood drawn for chemical testing?

What types of evidentiary tests are allowed?

The three types of testing that may be administered under the authority of the Implied Consent Law are blood, breath, and urine. The breath test is usually the first test DUI suspects are asked to perform. The breath test does not detect the presence of controlled substances.

If drug use is suspected, the arresting officers will request a blood test. When blood or urine testing is employed, the specimens are sent to a

Wisconsin licensed laboratory. Urine testing is least utilized test because of it unreliability.

Are the chemical tests accurate?

Chemical tests can be wildly inaccurate, especially if testing protocols and procedures aren’t followed. The common chemical tests are breath, blood, and urine. For DUI charges related to drugs, urine and blood tests are done, and breathalyzers are only used for alcohol intoxication. Here are some ways the accuracy of these tests can be affected.

It’s not the preferred method by officers since it’s invasive and needs a lot of caution and care to test properly. For an intoxicated driver, taking the test can be difficult. Even after drawing the samples, they need proper handling and a constant temperature and shouldn’t be disturbed or shaken.

The test takes about a week to get results, which should have been spent preparing for the case.

These tests are also invasive, need lab testing, and can be highly unsanitary. Although they are loved by drivers who hate needles, they are less accurate compared to blood tests, especially when determining current substance levels in the body. Even if a driver waited until they got sober to drive, the urine test would return high alcohol levels. Urine tests can also show drugs you took weeks ago, and intoxication has passed.

It’s ideal for alcohol intoxication, and it’s non-invasive, simple, and inexpensive. When protocols are followed, they can be accurate.

However, results are affected by mouth alcohol content (traces of alcohol left in the mouth after drinking and haven’t been absorbed into the system) and can return high BAC levels.

Breathalyzers need proper calibration to work well. Improper maintenance or calibration can lead to results being dismissed in court.

A qualified law firm understands how to use test inaccuracy to get you off DUI charges.

I did not understand the Implied Consent Law when the officer read it to me. Do I have a defense for refusing the chemical testing?
The answer is No. Any defense based on confusion is not recognized due to the likely intoxication of the individual in question as long as the arresting officer followed the proper procedure and read the proper paperwork.

Nathan J. Dineen is ready to help you fight for your rights throughout the State of Wisconsin. Schedule a free consultation today in West Bend, Germantown, Appleton, Milwaukee, or Sister Bay.

If you have questions regarding a blood or breath test refusal, please contact Nate Dineen for an initial consultation at 1-877-384-6800.